No, not that sort of unit test.

As an exercise, I made a Starcraft 2 map that pits various sizes of starting-unit squads against each other. This post covers the initial results of my test. 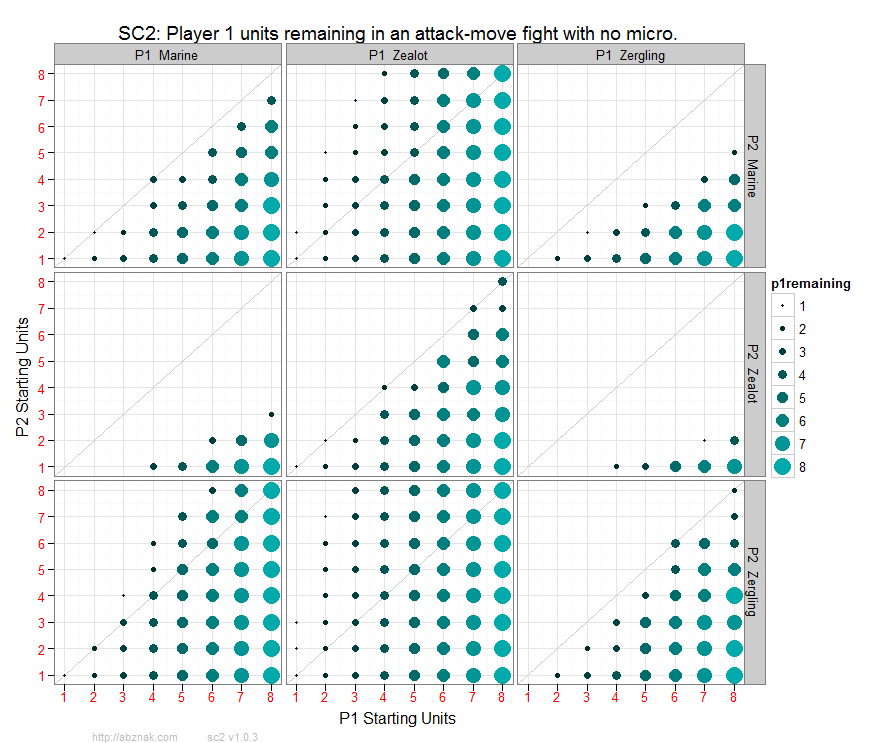 This graph shows how many units Player 1 (P1) had left after attack moving through Player 2's (P2) squad (while P2's squad was likewise attack moving through P1's squad). All the fights resulted in victory for one side, so if P1 had any units left, P2 had none. Only fights that P1 won are displayed. It says "no micro" because there was no micromangement, only the default AI was used. A good human player can improve a unit's performance by issuing more specific orders (focusing fire, pulling back damaged units etc).

How to read the graph

The CSV file I used to generate the above chart can be found at http://abznak.com/pub/20100911.unittests.csv. You can ignore the columns with names beginning with "x". The other columns are, I hope, self explanatory.

The test consisted of:


I think all 4 of the actions happen at the same game time. Point 1 and point 2 were on an empty flat surface, on a horizontal line, 15m apart. (I'm going to call whatever distance unit the map editor uses "m", as saying "15 units apart" is confusing).

None of the units had any upgrades.

In this situation, 2 zealots will beat 7 'lings and 3 zealots will beat 7 marines. But the there was no micromanagement, so, for example, in the 8 marines vs 8 zealots case the marines split their fire between the two lead zealots. Also, each test was only done once. Subsequent experiments have show that the outcomes are not always the same (sometimes one zealot will die in 8xZealot vs 8xMarines, sometimes all zealots survive).

Those of you that don't know SC2 should also note that for 100 Minerals you can by 1 zealot, 2 marines or 4 zerglings.

I used the SC2 map editor, some commandline tools, R and ggplot2. Do email me if you'd like a copy of the map (maps at abznak.com). It's currently just a bit rough to publish.


But that's going to have to wait, because I feel like actually playing some SC2 now. I'm thinking 3 zealot rush.